Vancouver Gaming Guild: We are a Volunteer, Non-Profit Society dedicated to Networking for Vancouver BC Tabletop Gamers and Beyond...!

» Looking for a group to DM

I'm Dave, I used to live in Vancouver, but then I did something stupid and now I'm trapped in Alberta.

I'm designing a game which started out as a Savage Worlds port of the AD&D homebrew we played when I was fourteen, but due to some, well … shit? … it morphed into an epic that's two parts old-skool fairy tale, one part modern metaphysics, and one part alternate timeline of the Bible where all the important things happened the OTHER way. I hope to make you all as crazy with it as it's made me, and prove once and for all that the Real World is actually nothing more than God's own personal D&D game.


I also like Paranoia, and I'm playing in a really bitchin' Changeling: The Lost game right now. My character is an Irish Catholic leprechaun, and the only one in the group with first aid skills. This is how I was able to squeeze a Dwarven Cleric archetype into a modern-day Seattle crimeworld. (My Irish accent is almost indistinguishable from my Scottish one.) 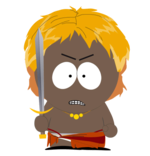